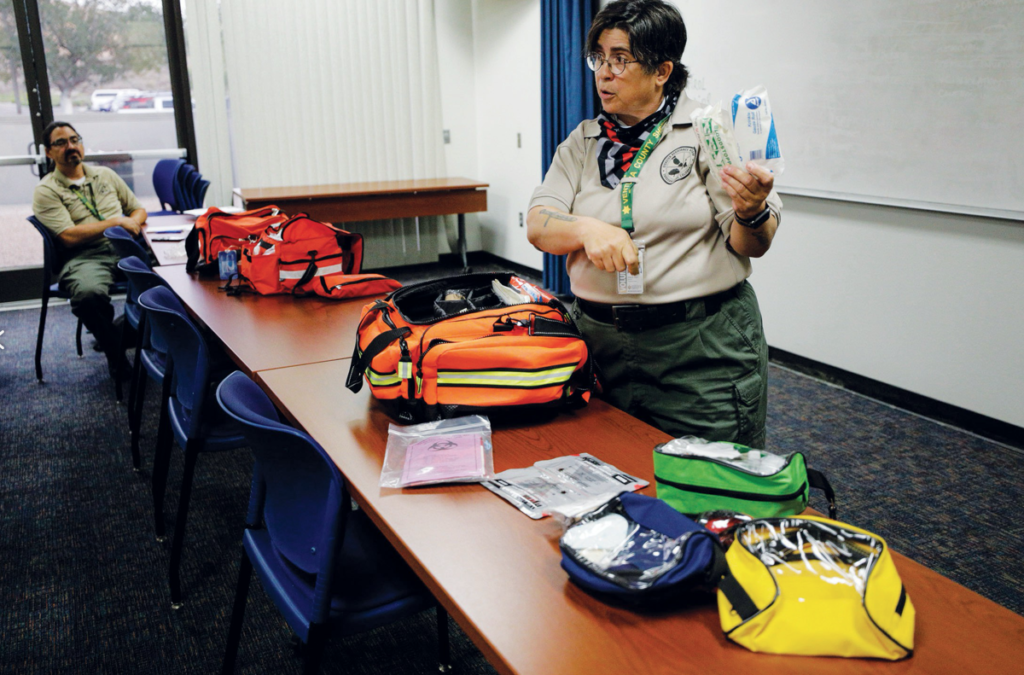 EQUIPPED—Erin Huey, at right, medical lead for the Thousand Oaks Disaster Assistance Response Team, goes over items in the group’s new first-aid kit during a meeting at the East County Sheriff’s Station on July 22.

While on a flight to Las Vegas last week, Tom Horan, a member of Thousand Oaks’ Disaster Assistance Response Team, heard a flight attendant trying unsuccessfully to wake a woman in the row behind him.

So Horan made use of his training as an emergency medical responder, which he received as a member of DART.

The retired tech salesperson offered his help to the attendant. He took the ailing passenger’s vital signs and assessed her condition, concluding that she was in diabetic shock. With the help of two nurses on board, they found some glucose pills and administered oxygen as the plane landed in Vegas.

At the gate, Horan and the nurses passed the woman off to paramedics who were waiting for them in the airport.

When Horan got on a plane to return home July 22, he discovered he was sitting next to the same woman he had helped two days earlier, San Fernando Valley resident Roma Williams.

Williams told the Acorn this week that she is feeling better and is grateful for Horan’s help.

“He was there right on time,” she said. “He said kind words to calm me down and he was very nice. When you’re scared and you have somebody there to calm you down, it makes you feel comfortable. I’m glad he was there.”

This isn’t the first time the 10-year veteran of the DART team has been able to help with midair medical emergencies.

“I’ve done about five or six in-air procedures at this point,” he said. “The running joke among my friends and family is ‘Don’t fly with Tom.’”

DART is a team of citizen volunteers who are trained to aid the community during disasters like earthquakes and to help the Ventura County Sheriff’s Office with missing person searches, evidence searches, burglary patrols and, most significantly, rendering medical aid. DART staffs first-aid stations at public events like the upcoming Relay For Life walk, the Touch-A-Truck parade and Summer Concerts in the Park hosted by Conejo Rec and Park.

“We’re the Swiss Army knife of VCSO,” Horan said of the team’s multiple uses, but he said 90% of what members do involves medical response.

DART has increased its focus on emergency medical response training in recent years. That is due in large part to Erin Huey, a U.S. Army veteran who joined DART around four years ago. Huey has 16 years of military experience between the Army and the National Guard, and before joining DART she provided first-aid training to organizations including the American Red Cross and Girl Scouts of Greater Los Angeles.

The Simi Valley resident (T.O. DART members don’t need to live in the city) was one of the first women to serve on a COBRA helicopter crew in 1979. She owns and operates Soteria Training Services, a company that provides education in emergency services including basic CPR as well as first responder and professional certifications. She is also a walking coach with the Ventura County Area Agency on Aging.

Huey said DART members receive at least 80 hours of training and can do nearly everything an EMT can do short of transporting a patient.

“You need an advanced level of training if you’re going to play in a uniform,” Huey said. “You don’t get to pick and choose what the public needs in the moment. You’re a representative of the City of Thousand Oaks. You’ve really got to show up.”

But the training comes in handy when DART members are out of uniform, as well.

A short time after member Chris Barnes completed basic life support training he had the opportunity to help a trauma victim.

He was home on a Sunday afternoon about six weeks ago when he heard screaming and commotion. He ran to help and learned someone had been attacked by a dog, so he introduced himself as a medic, then rendered aid and helped bandage the victim’s wounds while keeping them calm

“Chris Barnes did everything right. I was so happy for his response. And Tom has been on a plane and rendered really spot-on care,” Huey said. “It’s just so inspiring when people get onto a team and want to use their training to help the public.”

DART members, Horan said, end up getting a lot more out than they put it. Plus, they carry around the knowledge that if an emergency strikes, they won’t be caught flat-footed.

“Our training goes with us wherever we go,” he said.

DART is looking for additional volunteers. 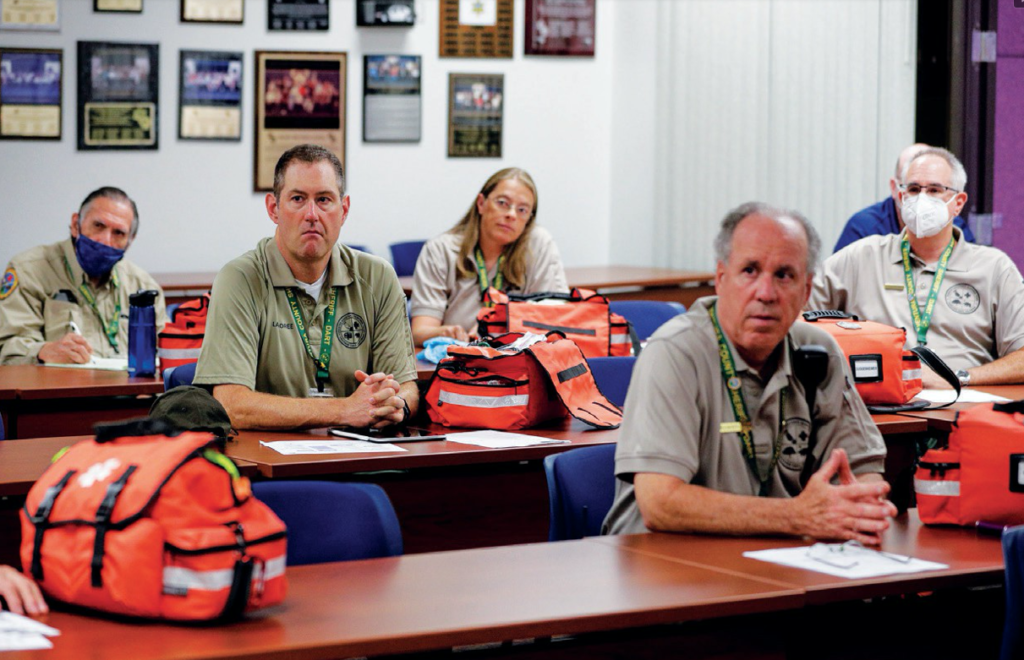